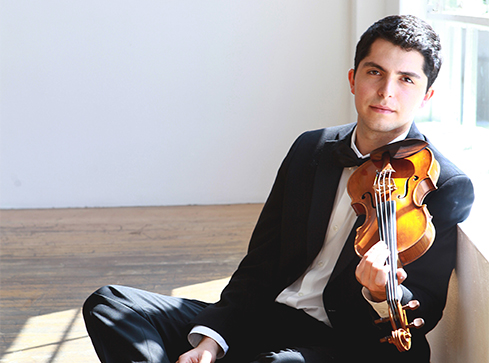 Violinist Ryan Meehan has been hailed for his “remarkably polished and sophisticated playing” (Chicago Tribune) and noted for his “mature lyricism and disciplined artistry” (Sarasota Tribune). Meehan has performed across North America and Europe in such prestigious venues as Carnegie Hall, the Kennedy Center, and Wigmore Hall.

His performances have been broadcast on National Public Radio’s From the Top, WFMT (Chicago)’s radio program Introductions, and PBS’s From the Top: Live from Carnegie Hall. As a soloist, he has garnered top prizes in competitions including the Washington International Competition (also winner of the Audience Prize), ASTA National Solo Competition, Artists’ Series of Sarasota, Pasadena Showcase for the Arts Instrumental Competition, and NFAA Young Arts. In January 2014, Meehan was the featured soloist in Shostakovich’s Violin Concerto no. 1 with the Colburn Orchestra. As a chamber musician, he has won Grand Prize at the Coleman, Chesapeake, St. Paul, and Rembrandt chamber music competitions, as well as top prizes from the ARD Munich, Hamburg, and Fischoff competitions.

He has collaborated with such esteemed musicians as Menahem Pressler, Jean-Yves Thibaudet, Paul Watkins, Ronald Leonard, and members of the Emerson, St. Lawrence, and Ebène String Quartets. During his summers, he has been a featured performer at the Aspen, Verbier, Music Academy of the West, Banff, Chautauqua, and Eastern Music festivals. He is a graduate of the Colburn School Conservatory of Music. His teachers include Robert Lipsett, Arnold Steinhardt, Almita Vamos, Roland Vamos, and Amy Schwartz Moretti. In 2014, Ryan Meehan joined the faculty of Stony Brook University as Artist-in-Residence and a visiting assistant professor of music.